*Sorry this post is so late, but better late then never right? Actually I don't believe that. I try to always be early because it's rude to be late.  Anyway here's my review.
City Of Fallen Angels

By Cassandra Clare
Summary: City of Fallen Angels takes place two months after the events of City of Glass. In it, a mysterious someone’s killing the Shadowhunters who used to be in Valentine’s Circle and displaying their bodies around New York City in a manner designed to provoke hostility between Downworlders and Shadowhunters, leaving tensions running high in the city and disrupting Clary’s plan to lead as normal a life as she can — training to be a Shadowhunter, and pursuing her relationship with Jace. As Jace and Clary delve into the issue of the murdered Shadowhunters, they discover a mystery that has deeply personal consequences for them — consequences that may strengthen their relationship, or rip it apart forever.
Meanwhile, internecine warfare among vampires is tearing the Downworld community apart, and only Simon — the Daylighter who everyone wants on their side — can decide the outcome; too bad he wants nothing to do with Downworld politics. Love, blood, betrayal and revenge: the stakes are higher than ever in City of Fallen Angels.
Review:
Two years ago, as I read City of Glass I was under the assumption that it was the final book in the series. I was happy with that ending. While it had left some things open, I was very happy with how it all came together. Because of that I was excited when I heard about City of Fallen Angels just because I loved the previous books so much, However I didn’t find myself as crazy with waiting for it to come out. It even took me a couple of weeks to go out any buy it after it had been released, but I loved it as much, if not more as all the others.
Drama and suspense is nothing new from Cassandra Clare, we saw so much of it in the first three books, but this one had just as much if not more. I couldn’t put it down. I brought it everywhere with me that I could get away with. Clare has an addictive way of writing that makes you hungry for more. One moment you’re following one character and then you switch over to another that is in a completely different obstacle. All those different plots and characters always link together and make this book so intense and fun to read.
There was a few new characters in City of Fallen Angels, some you would know from Clockwork Angel and some completely new ones. I felt that these characters worked well for the story. It didn’t feel like Cassandra Clare was forcing a new plot and characters on us. They felt right, and like they belonged. I really enjoyed them.
While I wish Jace could just have a break for once (he really deserves one), I thought City of Fallen Angels was an excellent addition to the series. I can’t wait to see what else Cassandra Clare has in store for us next.


*Actually I just wanted to add that I really didn't like this cover. I thought it was no where near comparison of the other three. What do you think?

I decided to do a vlog this week because I bought a bunch of books.

I use to do the blog hop every week but it slowly dwindled down to never doing it at all. I thought I should pick it back up this week since it's SPRING BREAK! I really loved finding all the new blogs. The Blog Hop is hosted by Jen at http://www.crazy-for-books.com/ , and go there to find out more about the Hop.


Happy Friday everyone! Here's the Hop question this week....


"If you find a book you love, do you hunt down other books by the same author?"
If I really loved the book I will. For example when I read Just Listen by Sarah Dessen, the second I finished I went out to find more of her books. Now I've read almost all of them and she's one of my favorite authors.

If you're here on the Hop you should also check out my Blog Anniversary Giveaway! while you're here. Also leave a comment so I can hop over to you're blog! I love visiting new blogs.


I will also have my review of City Of Fallen Angel up later today or tomorrow. I just finished it yesterday, and it has to be one of my favorite in the series.

I have had this blog for one year now and I wanted to celebrate this by having a small giveaway! To enter all you have to do is enter in the form below. You also have to be living in the U.S. (I don't have a job can't send books internationally). Most of the information in is the video in the post below but this sums it up.

There will be a 1st 2nd and 3rd place winner. The first place will get the pick out of the books below. Then the second place will get the choice of the 2 remaining books. The third place will be with the final book. If they don't want the book I will pick another person.
I might add another book or two to choose from so keep a look out for that.  Here are the books so far...

I hope there are many more anniversary giveaway's on my blog and that all of you keep reading.
--Danielle
P.S. I have spring break starting Friday so I should be able to catch up on my reviews then. I'm sooooooo sorry that I haven't been able to type any up lately.
at 3:48 PM No comments:

This video is my IMM and my Blog Anniversary Giveaway information!

Giveaway! End date not decided yet. Sometime in May or June.

The form isn't working right now so I will post the entry form tomorrow afternoon!

I'm also going to add some little things for each winner, so keep a look out for that. Maybe some swag or I'll add another book.

Here are the three books if you didn't watch the video. 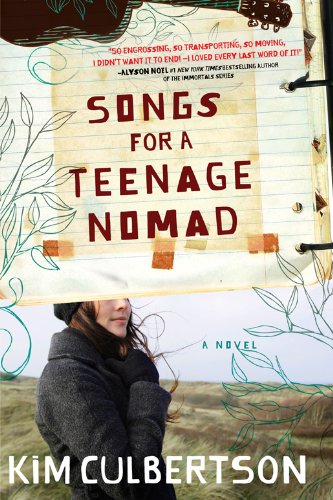 Thanks to everyone who as stuck around for the whole year and everyone who reads my nonsense. You are all great and I'm so glad I made this blog a year ago. Hopefully I'll have many more Blog-anniversaries!

I'm about to start reading this today and the trailer made me even more excited to read it. I was skeptical at first because it has actors but I really enjoyed it..

What do you think?
I'm a huge fan of Kelley Armstrong's other series so I can't wait to read this spin off.


--Danielle
Sorry I've been MIA, my sweet sixteen is today (nothing to big, I might post a few pictures on twitter if you're interested) So I've been running around planning that. Next week I'm going to DC for the Cherry Blossom parade with my marching band, so I might be MIA again... I wish I the scheduled posts things worked for me. :(


Have a great weekend!